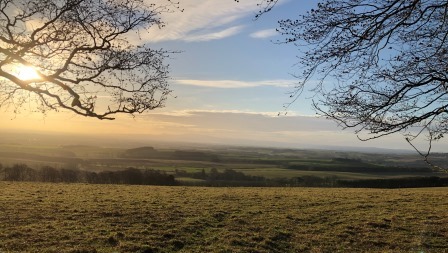 Many thanks to everyone who braved the wintery January weather with us to take part in excavations on Bunkle Edge. Bunkle Edge is an 8km long ridge running broadly WSW-ENE between the Eye Water and Whiteadder, with a series of prehistoric forts and earthworks located along the summit of the ridge. We were exploring a sub-rectangular earthwork close to the Marygoldhill Plantation fort (read more about it here). Our excavations took place on the portion of the earthwork that lies within the Marygoldhill Plantation.

The earthwork perhaps represents the remains of an enclosure. It was previously visible on the ground as two banks with a central ditch but was levelled by ploughing. Excavations were carried out in 1980s; you can read the report on this work here. The earthwork was interpreted by the previous excavators as a defensive enclosure annexed to the nearby fort. Its function was seen as defensive and it was considered to be associated, and contemporary, with the nearby fort (Strong 1988). Despite these earlier excavations, there is still a lot to learn about this enigmatic site so we set off to find out more.

We excavated a single trench across the enclosure within Marygoldhill Plantation; the earthwork survives better here where the ground has not been levelled by agricultural activities. Just as the previous excavators found, we noted that the ditch at Bunkle Edge was cut into bedrock. The upcast material was incorporated into the banks, resulting in somewhat mixed, patchy bank material. While the previous excavators believed that the bank was around 3m wide, our work revealed that where we were digging it was only around 0.9m wide. However, on its outer face we revealed that a low wall had been constructed. This wall was slight, only one stone wide, and is interpreted as a footing or kerb to define the edge of the bank rather than the lowest levels of a substantial area of walling that could have covered the entire outer face of the bank.

The previous excavators recorded that “on the steeper south-east side the fractured ends of the strata were covered with a smooth yellow clay” and interpreted this as having been undertaken by the ditch’s creators, “perhaps to exclude the possibility of footholds” (Strong 1988, 120; 123). Clay was identified during this most recent phase of work, covering the bedrock everywhere that it was exposed. While Strong’s interpretation is a possibility, our interpretation is that the clay formed naturally during weathering of the exposed bedrock while the ditch was open. Similarly, a layer of boulder clay was identified overlying the natural, directly beneath the outer bank material. This suggests that the bank was built directly onto the natural till, which had been exposed as part of the process of digging of the ditch.

The footprint of the enclosure can be traced only as a three-sided rectilinear feature; its full form (assuming that it existed beyond the known extents) is not known, and it is not clear whether it enclosed the nearby fort (if indeed it is contemporary with or later in date than the fort). The LiDAR data shows an anomaly running broadly NE-SW to the south of the fort. If this were a continuation of the earthwork, the area contained within the enclosure would amount to over 12ha. One comparable example of a hillfort contained within a larger enclosure is Huntshaw Hill near Earlston. However, the linear anomaly in question could be geological since the underlying geology in this area may display natural ridges running along this alignment due to deglaciation having occurred in this direction (McCabe et al 2007, 314). Indeed, similar anomalies on this same alignment are visible elsewhere on the Bunkle Edge ridge in the LiDAR data. It is not even certain that the earthwork would have formed an enclosure: unenclosed earthworks close to or associated with hillforts are known elsewhere, for example at Woden Law near Jedburgh.

We had very much hoped to retrieve material suitable for radiocarbon dating from the lowest levels of the fill of the ditch. Indeed, the excavators in the 1980s noted that there was a considerable flow of water along the ditch. However, we found the ditch to be entirely dry and the fill free from any organic material that we might have used for dating – charcoal, for example. This was disappointing, especially after everyone’s hard work in heaving so much stony fill out of the ditch, but we are glad to have further clarified the form of the earthworks and added to what is known about it nonetheless. Many thanks again to everyone who participated in fieldwork with us.