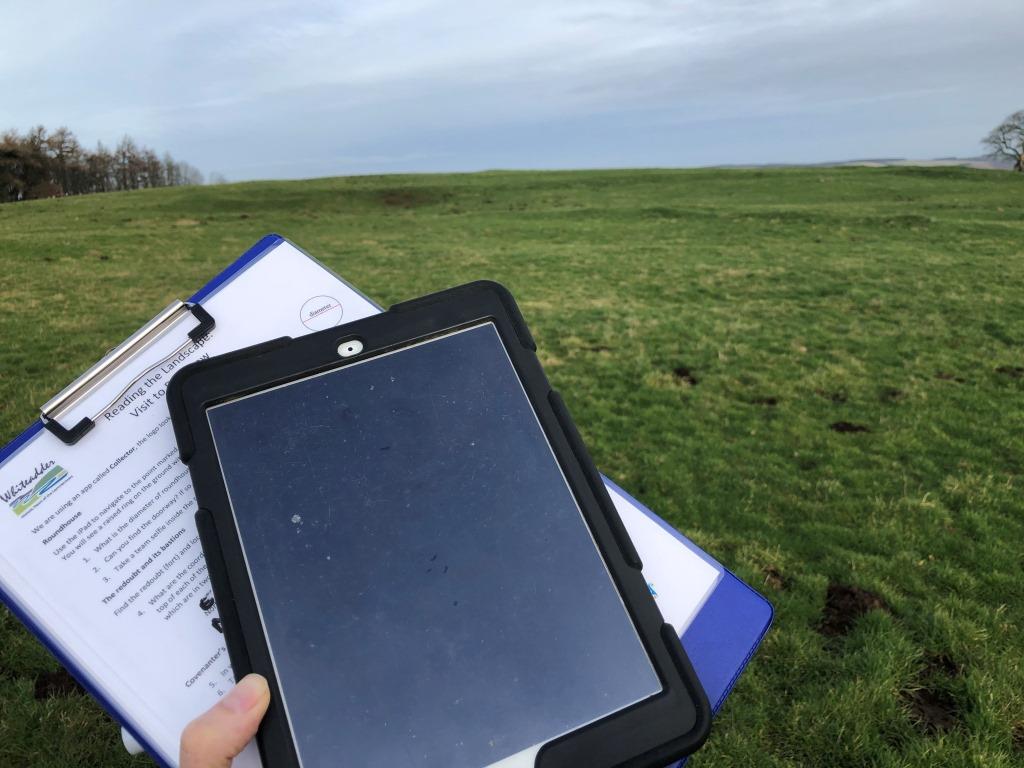 This week, AOC’s community archaeologists have been working with Duns Primary School, taking pupils out into the landscape to explore their archaeology as well as bringing the past into the classroom. Over the course of the next few weeks, we will spend a day with each of the five P5-7 classes, totalling around 130 pupils.

Since LiDAR is central to the Whiteadder project, it is central to our learning and outreach, too. Our workshops begin with a visit to Duns Law, where we work in groups to travel from the Iron Age to the modern day and explore the archaeology of the hilltop.

Duns Law is a perfect location for learning about archaeology since it has remains from multiple time periods clearly visible on the ground: a 17th century redoubt and associated memorial stone; medieval rig and furrow; the hillfort itself, believed to be Iron Age; and later prehistoric settlement remains which overlie the hillfort ramparts.

Using iPads loaded with the LiDAR data, as well as historic maps and aerial photographs, groups of pupils navigate themselves to various points around the hilltop and answer questions about the features. Can they find the bastions on the four corners or the redoubt, or a prehistoric enclosure? What is the diameter of the hut circle? In which year did the Covenanters assemble on Duns Law? The learners use the iPads to guide them as well as looking for clues on the ground, lumps and bumps that reveal the location of evidence relating to past use of the site.

Back in the classroom, our focus shifts to the hut circle that we found on the Law, and the roundhouse it represents. After talking about roundhouses and the Iron Age, and watching a short video set in a replica roundhouse, the learners work in teams to create their own replica roundhouses. Each team is provided with a wooden base with upright timbers fixed in place. They weave willow withies around the timbers and smear clay over the top to represent wattle and daub. They then create roof structures using small sticks, raffia and string. We don’t give many instructions for building the roof since we don’t know exactly how roundhouse roofs were constructed; problem solving is the order of the day! With a little guidance and lots of encouragement, each team creates a roof for their roundhouse and ties on bundles of raffia to keep the rain out.

We’ve delivered two workshops so far and have another three to complete. We’ve been incredibly luck with the weather so far and are keeping our fingers crossed for the coming weeks. Thanks so much to P5 and P6/7 for being so enthusiastic about the workshops, and we look forward to working with the remaining three classes later in the month!